Collaboration : The Making Of An Artist / A Jornada De Um Artista
1

Detouring from the previous chronology of stories, I want to highlight a recent creative experience on the Potomac River.

Now and then the river tide exerts its pull, linked as it is to the Atlantic Ocean, through the Chesapeake Bay.  This lunar magnetism inspired a new collaboration, with Robin Croft, to create a group of sculptures in the water.

Some months ago, we had worked on a project of Robin's, near his home in Manassas, Virginia.  It was a wooden structure suggesting a rocket and silo.  Unfortunately, it was destroyed by vandals before completion.  Such is the nature of this work, transitory and subject to Nature's whims.

I was fortunate to connect with Robin in 2014, after reading an article about him in the Washington Post, by John Kelly.  Robin was building one of his shipwrecks, near Manassas, VA, out of wood found on site.  John Kelly also linked a video of the project with an interview of Robin.  Similarities in our outdoor work intrigued me and  led me to contact him.  Robin was very approachable and we had an interesting conversation that led to collaborating on outdoor projects.  We were both working in relative anonymity, running out of storage for unsold works, and creating large, temporary, outdoor sculptures with found materials.  Respecting the environment by assembling pieces that would be reabsorbed into the site, on disintegration, allowed us to work with no extraneous impact on the site.  This gave us the ability to do large scale work, in settings with plentiful materials, with no concern for storage or studio space.  Robin characterized his work as "drawing" with wood in wattle technique.  This reminded me of houses built in the interior of  Brazil, as I grew up.  I was assembling structures by following relationships suggested by the shapes of wood I found.  Most of my work was less representational, yet Robin respected what I was doing, as I was drawn to his work.  The physical aspect of collecting and hauling materials was made less cumbersome  by assisting each other.  Sharing ideas and camaraderie rendered the process more fruitful.  Working together was a tacit validation of what we were doing.

Both of us had a couple of days available and agreed to work on my Potomac River site April 24 and 25.  After mulling some ideas, Robin's concept of refugees gripped us, as we shared a deep concern for people around the world seeking asylum, fleeing war and devastation.  The divisive rhetoric coming from politicians and the conflicted responses to the refugee crisis loomed as one of the great human tragedies of our time.  We felt compelled to create a statement near Washington DC, where our nation's response to such issues coalesce.  Our collaboration became an homage, representing refugees walking up river, on a site visible by south bound cars on the George Washington Parkway.  We planed on working at low tide, allowing us to build where the gravel would be under water at high tide.  This suggested the image of refugees reaching land from the water and marching on Washington DC.  The beach site, as we call it, looks north to the Wilson Bridge and a bit south, across the Potomac, to Fort Washington, on the Maryland side of the river.  This was the same site where, in 2014, Robin helped me build In Situ Assembly No. 3. 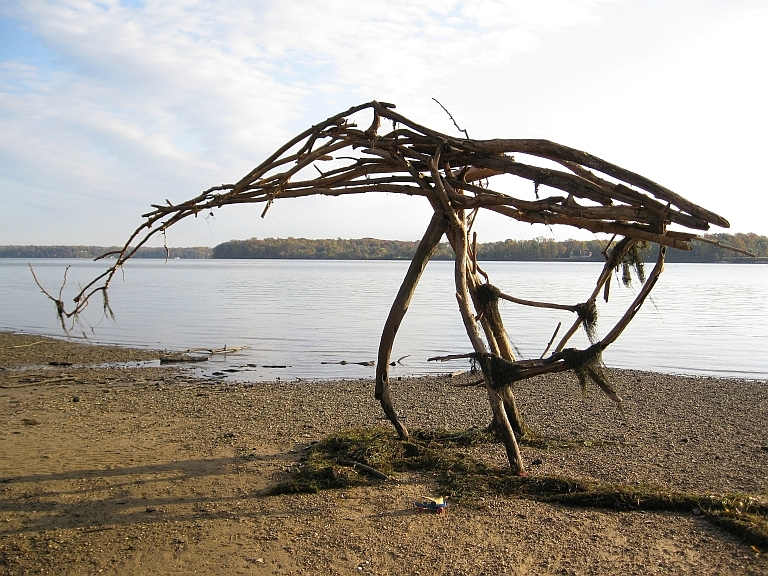 The spring rains had floated plenty of wood, from trees and branches, washed into the river.  Deposited along the beach edge was anything from hundred foot logs to gnarled root balls bleached and drying in the sun.  We spent some time dragging wood out to the edge of the water where we would build.  Robin staked out a sand bar across from my position.  I planned on assembling gesture figures, more suggestive than literal.  My goal was to work fast to complete several pieces for the group, in between tides.  Robin was more deliberate, creating a more elaborate figure in his "wattle" style.  Working at low tide, we used a spade to bury the ends of the logs we used as legs for our figures.  It was important to anchor them well as our refugees would stand in water at high tide.  The water would rise two or three feet and the group would be at the mercy of currents and floating debris.  Since we designed our projects to disintegrate organically, we used sisal twine where basic ties were necessary.  We also employed a six foot stepladder to increase our height range.  Each structure had to be well balanced on its two legs and weighted above the water line to help keep them from floating away. 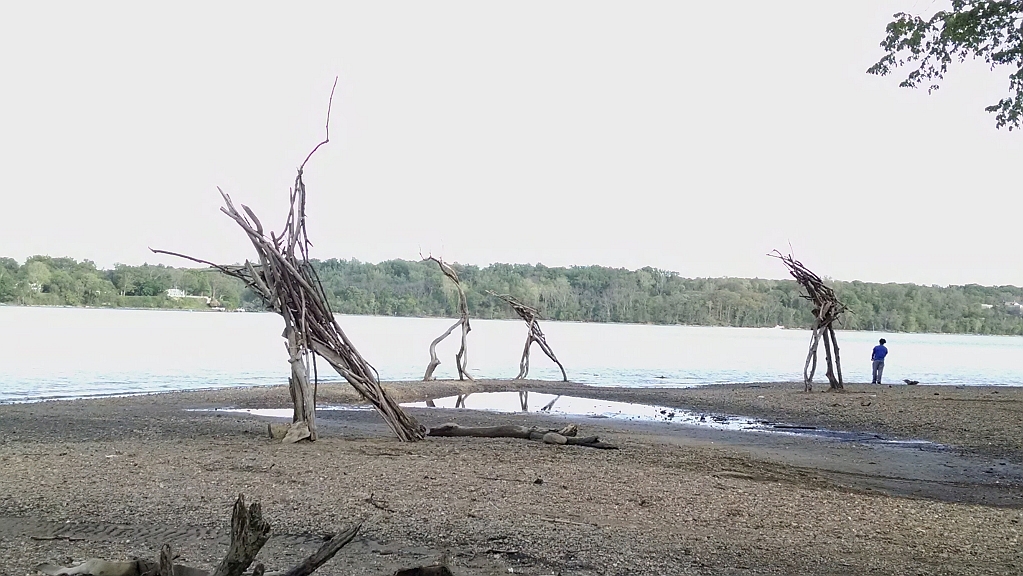 REFUGEES,Marcos Smyth and Robin Croft, day one at low tide, 2016.

Seen from the Parkway, Robin's figure was in the forefront.  With weight placed on the forward leg, seeming to drag the other, the figure had outstretched arms, giving it a desperate and supplicating pose.   My first three figures had no arms, suggesting these hung down and blended with the bodies of the figures.  The torsos leaned forward, as if plodding forward.  Though our styles were distinctly different, the material and structural elements brought the group of figures together, making them work as a collective.  Robin's sculpture made a bold, emotional statement, while the other figures in the group expanded the multiple impact of the refugee concept.  We hoped this project would surprise viewers and inspire thought beyond their immediate cares. 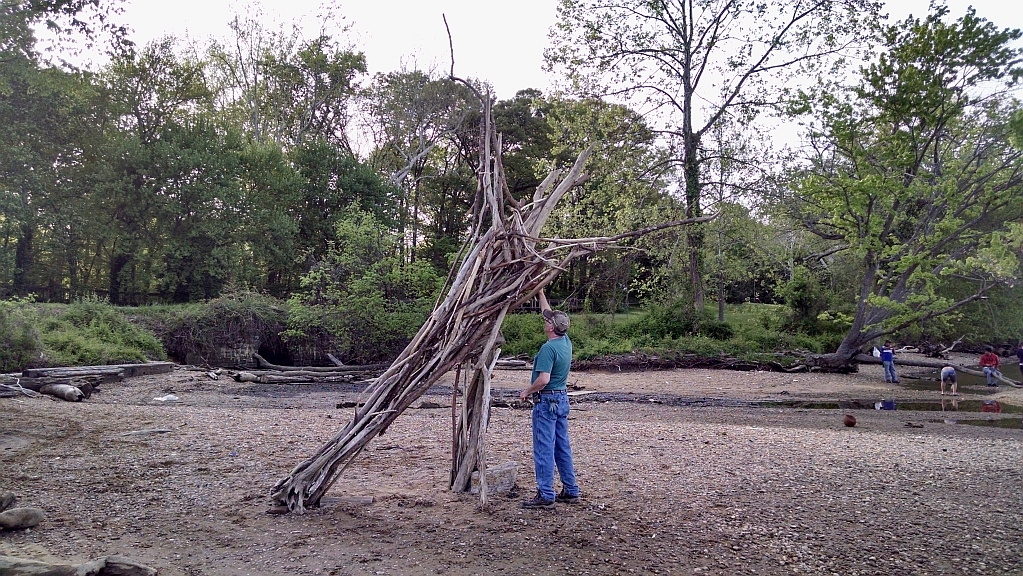 Having a balmy day to work with, our beach site was rather busier than the last time we were there.  Several families came fishing, walking dogs, and picnicking.  Generally, we were ignored as we worked.  By day's end, Robin had finished his figure and I had assembled three.  Tired, sore, and bruised, we were pleased with the results and wondered if our project would survive the next high tide or passersby. 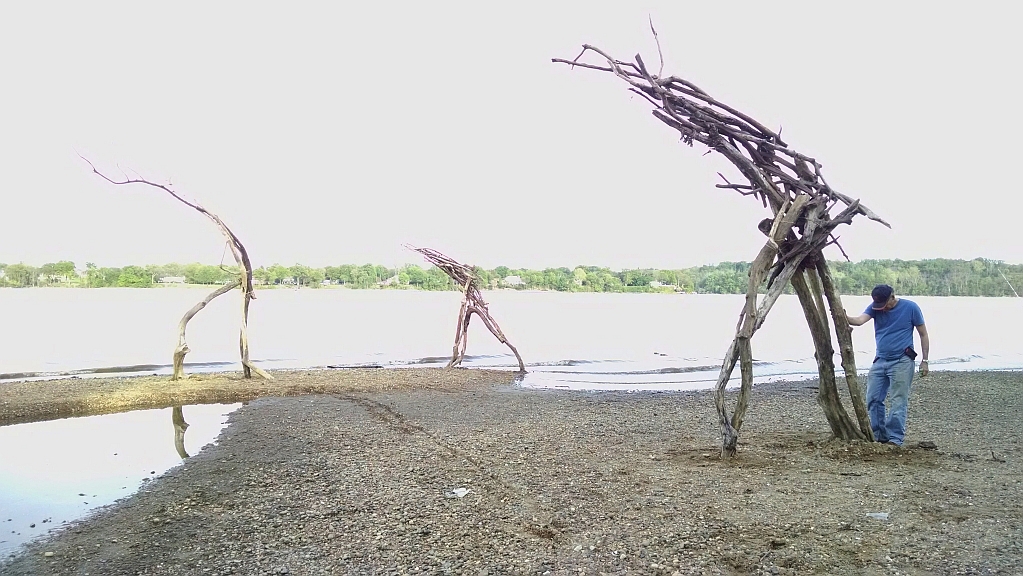 The following morning, we found that one of my figures had fallen.  It was the furthest out, which would have been in deeper water at height tide.  We built two more figures, of my design, closer in from the others in the group.  These had arms, as if ready to catch themselves if they fell forward.  Both leaned forward more that the others, suggesting exhaustion.  With five figures in the group, we felt the Refugees were well represented and were stable enough to last several days.  Robin and I committed to work on more projects together. 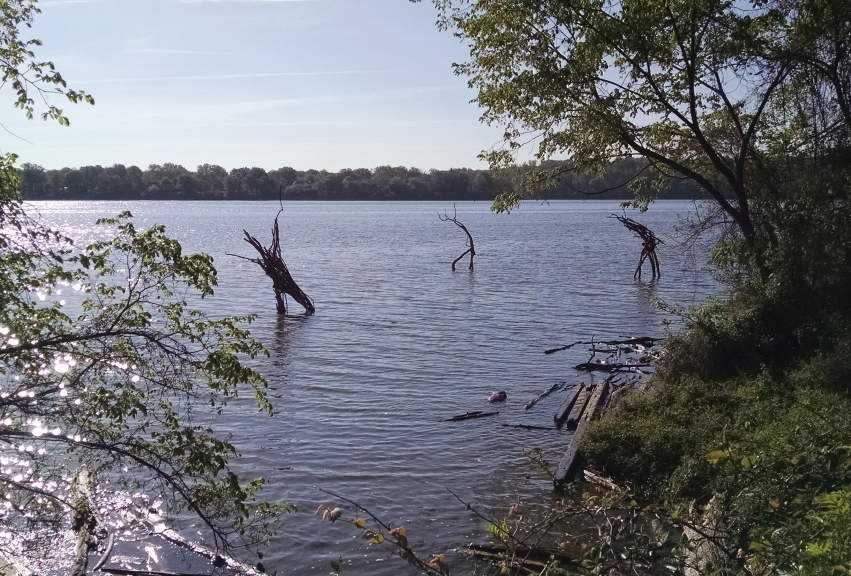 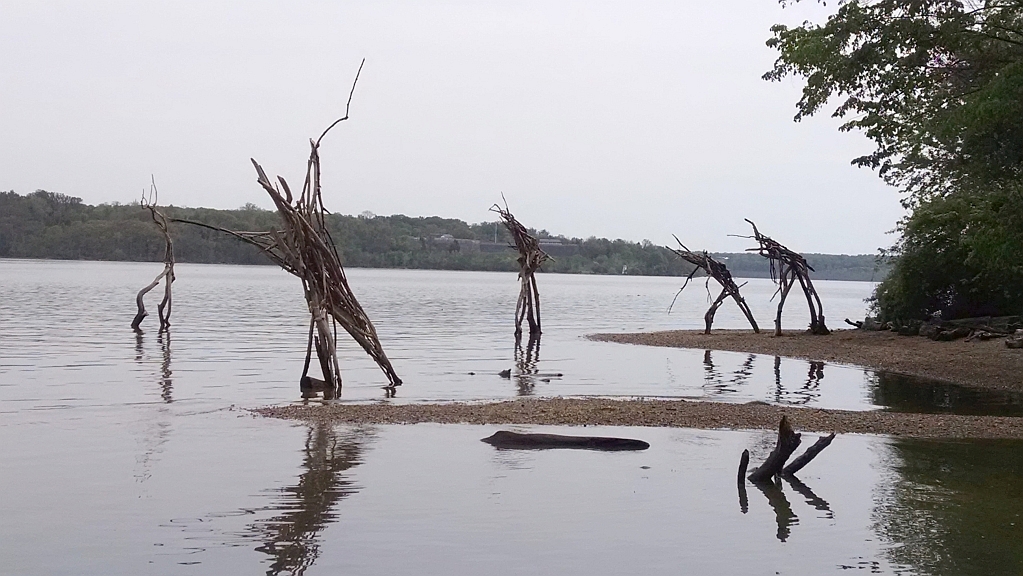 For the next two weeks, I monitored our project's inevitable disintegration.  Robin's figure was perhaps in the deepest water at the high tide and in the path of flowing water from a culvert under the parkway.  Wednesday, April 27, all five figures still stood, two days after completion.  On the 28th, I sent Robin a message:  "Another Refugee down.  Yours, today.  3 standing."  Several days later, another fell.  May 7, two refugees still held on, battered but mostly intact.  On the 11th, the beach was empty.